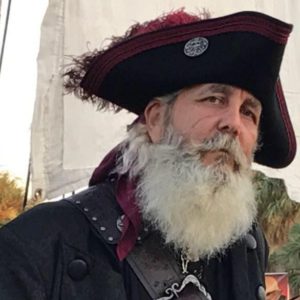 In the tradition of the high seas, Captain Keith Kidd Carson, Whitebeard the Pirate, is a fun-loving, rascally scallywag.  Hailed as one of the best Pirate performers, he has been seen at many Pirate Fests and Renaissance Faires from coast to coast. His garb is authentic, to augment the true character of the man within. He enjoys pillaging, plundering, and scaring the daylights out of the living. So you best be watchin’ yer step! But, he can also be family-friendly and above board when the need calls for it. At Christmastime, he also portrays a Pirate Santa.

A born entertainer, pitch man and emcee, Carson is available for all pirate themed events and hosting gigs. His sense of humor, great timing and patter is sure to entertain and draw a crowd. He also has years of on-camera and on-mic experience. He would make a great addition at a corporate event or convention booth, private party or event, festival, or children’s party. How about a Pirate Wedding? The Captain is an ordained minister and can legally perform most any type of ceremony you wish, provide assistance with vows, and any other needs you may have. Captain Keith Kidd Carson brings his “Piratude” to any event!

Check him out, if ye dare!

Brethren of the Space Coast